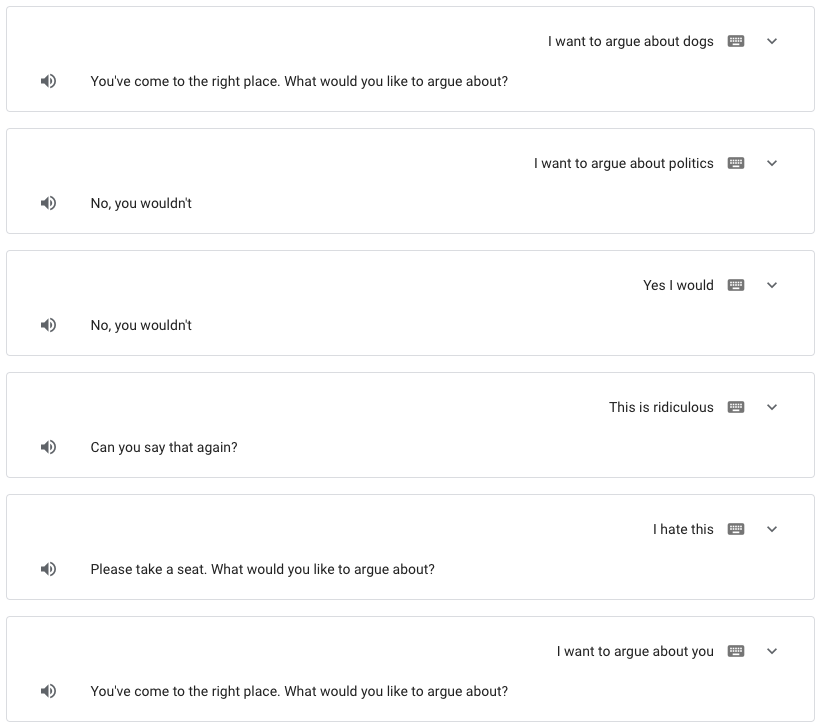 This week's assignment was to create something weird with Dialogflow and fill out an accompanying voice bot design worksheet. I used the in-built DialogFlow interface to create a simple and silly Argument Bot.

The bot is inspired by Monty Python’s absurd Argument Clinic sketch in which a man tries to purchase an argument but is frustrated by the other person’s responses. I love the dynamic between the two people and thought that this dynamic would be well suited to subvert the traditional notion of a subservient voice assistant.

Working with DialogFlow’s interface to create a substantive conversation was hard because I needed to hard code each intent, response or follow up. If there was a better way to do it, I was unable to use it this time around, however, I think the default fallbacks sort of work to undermine the conversation and achieve the intended goal of a frustrating conversation.

This is an absurd situation where the person is trying to purchase an argument with the bot. The bot is designed to frustrate and subvert the traditional notion of a subservient bot, using its mandate to be argumentative towards this end.

The bot is a person who offers the service of arguing. Its intention, unknown to the human, is to argue in bad faith. The power dynamic between the human and the bot becomes apparent as the conversation goes along, revealing that the bot has greater power over the human.

We need to detect an entry into the intent to argue. Once the bot knows that the person wants to have an argument, it is designed to stall the argument through fallbacks.

The bot repeats what the human would like to argue about

“I’m here for an argument”

“You’ve come to the right place. What would you like to argue about?”

“I want to argue about politics”

“Can you say that again?”

“Please take a seat. What would you like to argue about?”

“You’ve come to the right place. What would you like to argue about?”